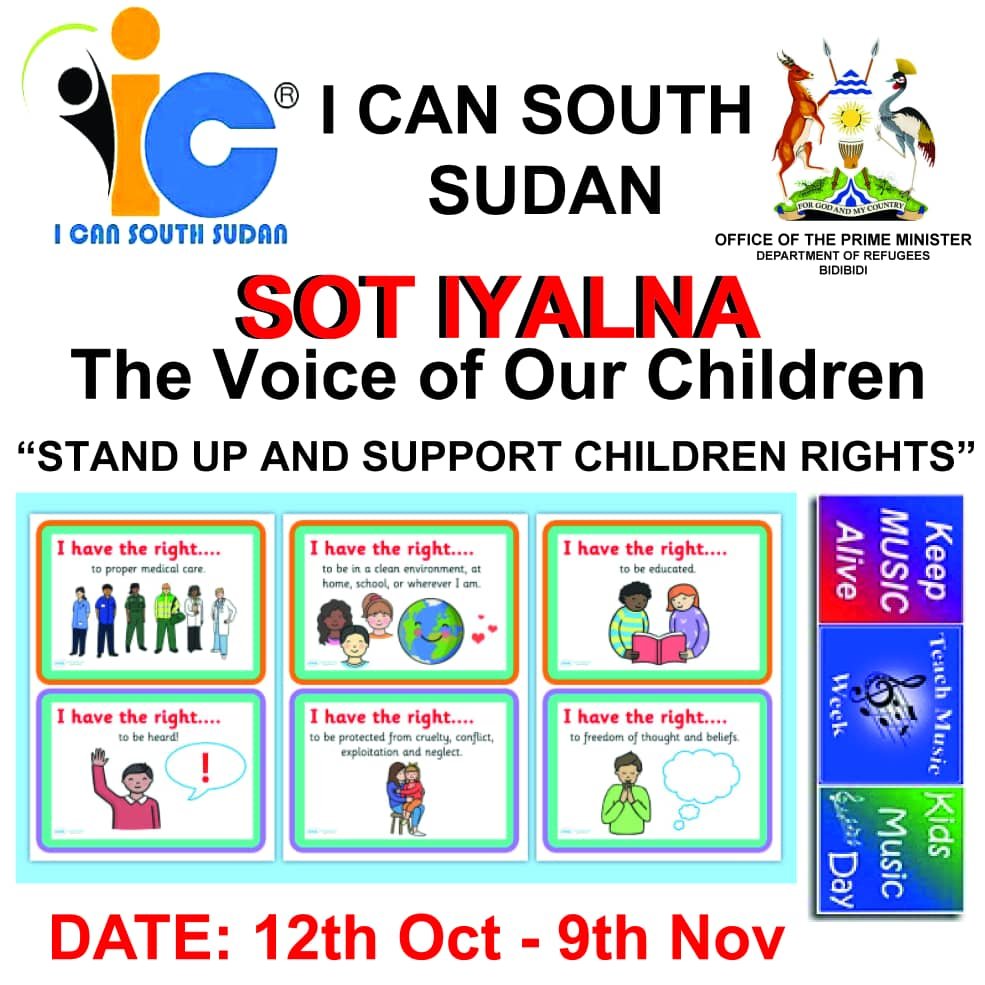 I CAN South Sudan this morning Launched Sot Iyalna (The Voice of Our Children), a campaign to raise the voice of Children on Child Rights, Early Child Marriage and Peace Building that will run for a month. The campaign which started this morning at Bidibidi Zone 1 in Block 5 attracted hundreds of Refugee residences who gathered to witness for the first of its kind event characterized by drama, music and key note speech from the children. Mr. Seme Ludanga the Cofounder and Project Coordinator of I CAN South Sudan in his speech introduce I CAN mission to the refugees and call on them to let the children go to schools even if the schools has poor quality education because education is every child right. Every Saturdays, I CAN South Sudan has planned a campaign on Child Right, Early Child Marriage and Peace that will be led by I CAN Children. The main campaign approach is through Street Music Jam, Drama, Speech from the children. This will be carried out in the 14 Blocks in Bidibidi Refugee Settlement Zone 1.

The campaign is aimed at educating the refugee community of child basic rights. "We understand, poverty, stress, living  standard can influence child abuse and hence we believe this campaign will help parents and guardians in the refugee community to be able to raise their children in a better way despite the situation they go through as refugees." Seme Ludanga the Project Coordinator said.

Speaking to Stephen Wandu, the Executive Director of I CAN South Sudan, he strongly talked of the children involvement in the peace building process "If the peace we are looking for is for the future of our children, then children should have a say and should be heard" Bimo emphasized. He further explained the importance of this campaign which gives children the platform and voice to engage in community peace building

In line with the launch of the campaign on 12th October 2019, I CAN Children Joined in celebrating Kids Music Day which is celebrated yearly by Keep Music Alive an organization in USA.

REFUGEE WOMEN LEADERS HAIL OPM, UNHCR FOR ENHANCING THEIR GOVERNANCE CAPACITY
YES WE CAN by I CAN Children ft JM Kennedy
Refugee Led Organizations' Call for Response on Covid-19 in Uganda
Comments